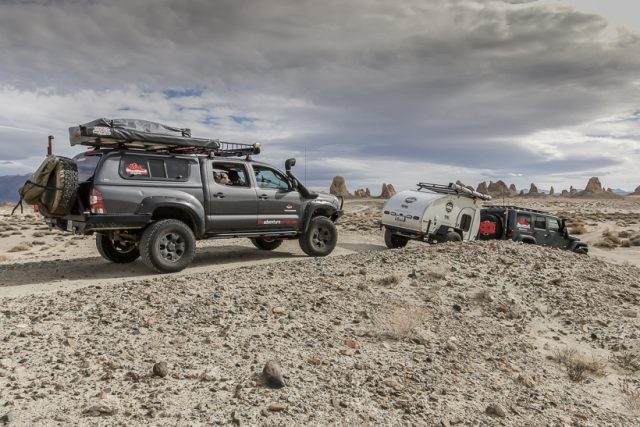 “Shackleton went on expeditions, we’re just car camping” – Call it what you like, an expedition, an overland adventure or vehicle assisted adventure, in all reality, the majority of us are basically just car camping. Here at TAP, we’ve noticed a trend as our little industry grows and gets more mainstream attention. We seem to be spending an increasingly amount of time explaining and sometimes justifying, what we do and why we have so much gear. We’re constantly explaining our snorkels, or should I say dorkels and our local Four Wheel Club (Jeepers) wink at each other as they introduce us as “overlanders”. Friends also joke about borrowing our $500 carbon fiber lightweight hammer (actually it cost $20, it’s a standard hammer and came from Home Depot). Hikers scowl at us as we slowly destroy the planet, passing them at 10mph on a designated trail.  On social media, traditional rivalries continue unabated between Toyota and Jeep fans and Earth Roamer owners must be dicks, because they’re rich! Roof top tents and trailers are amazing or pointless, as what’s wrong with simply sleeping on the ground in a $100 tent? On and on it goes!

Despite all this, we couldn’t be happier! Yes, we probably have too much gear. Some of it essential, some of it unnecessary and some of it simply frivolous. All of it enjoyed to the full. It doesn’t make us better drivers and it doesn’t make us better campers or adventurers. However, I’m not going to lie, for us, gear is part of the fun of being an overland adventurer. Recently, we’ve also noticed that most four wheel drive magazines and traditional outdoor lifestyle magazines are jumping on the overland band wagon and  apparently us adventure car campers are now “on trend”.

TAP will keep on doing our thing. We’ll keep having “adventurous car camping trips “, we’ll keep testing out gear and probably sometimes spend too much money on gear we may not need. So, our advice is this. Buy what you can afford and what makes sense to you and don’t worry about others. Learn how to drive on difficult trails, but also enjoy fire roads where you never engage your 4×4. Plan and dream your adventures and revel in your backcountry car camping. Finally, remember what we all have in common, an A##HOLE and an OPINION.

Enjoy your Expedition and TAP into Adventure!