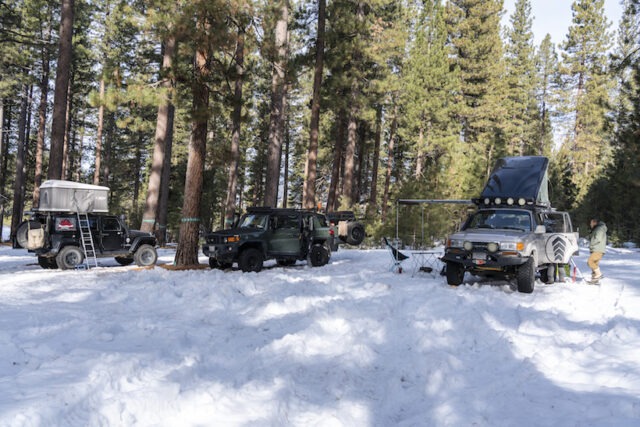 When you get asked to go on an overland snow camping adventure, of course you jump at the opportunity. Then you spend the next 12 weeks wondering what the hell you just got yourself into!? If you don’t like the cold, live at sea level, have never been snow camping or snow shoe’d before, well what could go wrong? This month I found out and yes, I’m obviously still here to tell the story.

TAP is based in San Diego and our idea of a brutal winter is when the temps fall below 55 degrees. So this adventure was definitely going to take me out of my comfort zone. The trip was put on by Todd Rodgers of Four Points Adventures and we were joined by Patrick Ma, the owner of Prometheus Design Werx. Todd has years of experience in the mountains and is a former member of Search and Rescue, so I felt safe under his watch. (My Wife made him promise that he’d at least bring my body off the mountain!). Patrick also has a lot of snow experience.

Frankly, “Adventure” seems an over used word by all of us, but getting out of my comfort zone felt real. I’m not going to lie, leading up to the trip I was excited and a little intimidated. To help mitigate these fears, I needed to work on my physical conditioning and also assemble the right snow gear. I prepared physically by averaging about 15 miles of hiking a week for 3 months, sometimes carrying a heavy pack. Lesson 1:To be honest, I should have carried the pack on more occasions, to allow my upper body to get used to the added weight. The pack felt really heavy at altitude, combined with wading through snow.

We parked our rigs at Hope Valley Snow park (21 miles away from South Lake Tahoe) as we had decided to tackle the most difficult part of the trip first. The plan was to leave the relative comfort of the rigs, snowshoe into the backcountry and camp overnight; returning the next day. The snow park is popular with snow mobiles and as I heaved on my pack, I eyed them enviously.

We had all agreed that this wasn’t supposed to be a complete suffer fest, so we hiked a mile or so across the flat meadow and then crossed the frozen Carson River before heading up into the tree line. For safety reasons we chose to traverse the river where we could see snowmobile tracks. If the ice could support their weight, surely it would support ours.

After a while of slowing gaining altitude in the trees and wading through heavier snow drifts, we found a small clearing with a view of the mountain. The perfect place to make camp.

Setting up a tent in snow is, shall I say…interesting. I had been advised that the correct way to use the stakes is called “deadmanning” – a technique where you dig a small hole and lay the stakes horizontally, before covering them with snow again. The snow eventually freezes solid and the taught lines do their work. Lesson 2: Don’t dig the holes too deep, as the snow freezes like concrete overnight. In the morning I had to spend almost an hour with Todd’s ice axe digging them out. Luckily he had it with him, or I’d still be there today, excavating them with my Overland Titanium Snow Peak spork!

While I struggled with my tent, Todd the expert, had finished erecting his and had also completed digging out the kitchen and hang out area (Yes, you read that right!). A lot of extra work for him, but a really cool (cold) camp set up for the three of us. Thanks Todd!

Without a fire, we all hit our sleeping bags fairly early as temperatures obviously plummeted after the sun had set. It got down to approximately 20F and although I had high end equipment, I was still cold over night and didn’t sleep well. It was the same for Todd and Patrick. Condensation in my tent was certainly an issue and it felt like I was lightly rained on most of the night. Despite the suffering, the next day the sun rose, coffee was brewed and we all survived with a tale to tell. All part of the Snoverland Adventure!

We hiked out and then drove 2.5 hrs up into a forested area northwest of Reno. The plan was to continue our Vehicle Supported Adventure by driving into the Lake Davis area.

Driving in, the snow conditions were relatively straight forward and we felt confident that with aired down tires and 3 winches between us, we could tackle most situations. After a couple of miles of fun fishtailing through the snow, we found a relatively flat area in the trees and set camp.

That night sitting around camp, Todd lit the propane fire pit, and time seemed to slow down. The comforts of overlanding were obvious to us all. Sitting around the fire, drinking whiskey and telling tales, seemed decadent and luxurious, compared to the previous night. That night in my RTT, I was warm as toast and slept well. The only sounds occasionally disturbing my bliss, were the howling and yipping of coyotes and a flock of honking geese at the nearby frozen Davis Lake.

Back at home and braving the brutality of the San Diego winter, many of my friends think I was crazy. Truth be told, our Snoverland, snow camping trip was simply awesome and certainly one I would jump at again. Despite some of the obvious discomforts and mistakes made, it was a true Vehicle Supported Adventure and getting out of my comfort zone was a great experience. This was a dry (wet) run for Todd, as he plans on Four Points Adventures offering a similar Snoverland Snow Camping Adventure Tour next year. Stay tuned.

Check out the gear used on the trip HERE