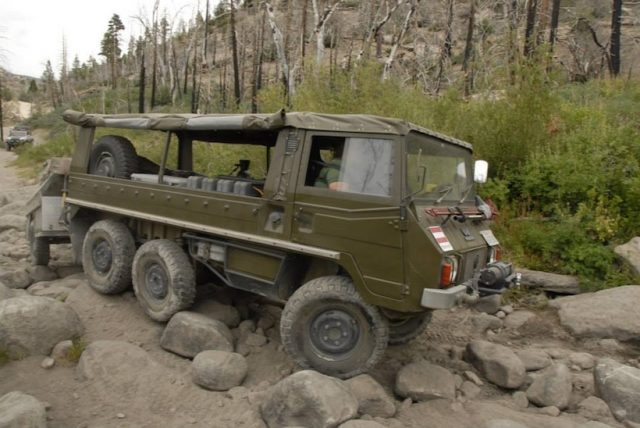 The owner of this month’s rig is Bernhard Leitner of Leitner Designs. The TAP crew met Bernhard while camping out at Blair Valley in Anza Borrego State Park a couple of years ago. We had seen him cruising by and ended up talking with him about his amazing rig.We thought we’d share his story and some interesting facts about the Pinzgauer.

Bernhard has always been interested in Pinzgauers as they were manufactured in the town that he was born, Graz Austria. In the 1960’s his father worked at the company that manufactured Pinzgauers as an engineering apprentice.  In 2003 Bernhard’s uncle told him that the Swiss Army was modernizing their fleet of vehicles and auctioning off their supply of aging Pinzgauers. Bernhard wanted both the 4×4 and 6×6 variants. His uncle agreed to drive the three hours it would take to get to the town where they were being sold and choose two for him. Bernhard’s Uncle had been a mechanic all his life and he  trusted his uncle’s judgment implicitly. He wired the money and had them shipped to the U. S. sight unseen. He did not regret it as the Swiss had taken impeccable care of both for the last 30 years. Storing them in underground heated shelters during the winters. 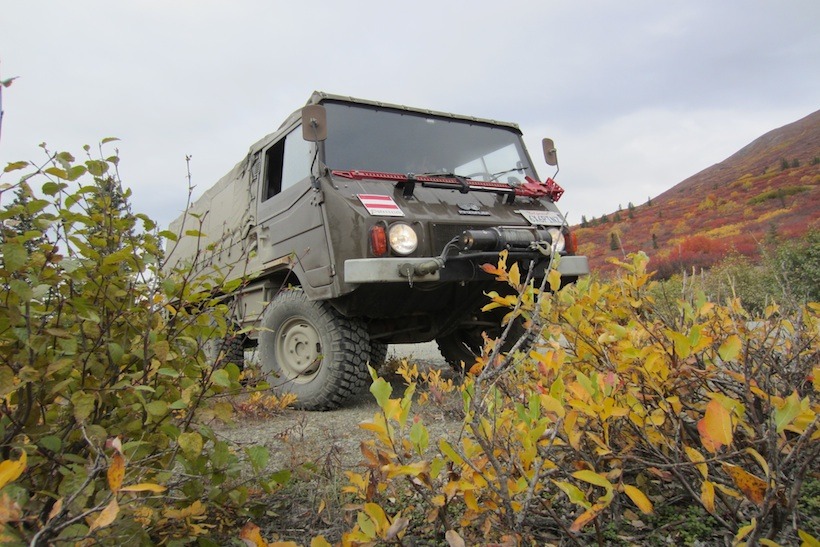 We asked Bernhard a few questions about his 6×6 1973 Pinzgauer that we thought our readers might want to know:

1.  What’s the advantage of having 6 wheels? The advantage is the increased amount of traction and flotation six wheels provide, 50% more to be exact. With the six wheels, the ride is really smooth. He floats over washboard, sand etc. The Pinzgauer has three axels so the wheels are closer together than a standard 4 wheel drive. It climbs rocky terrain almost like a caterpillar. It has an independent suspension system which means that each wheel moves independently. He never has spotters when scoping out a line on a difficult trail unless they are pinzgauer owners themselves. The Pinz has almost no articulation and traditional wheel placement could lift three wheels off the ground! Bernhard went on to say however that even with three wheels off the ground, he’s got three on….so on a standard vehicle it’s like having one wheel off the ground; manageable. Another thing is that the Pinzgauer has portal axles giving the vehicle 13.25 inches of ground clearance with modest 34” tires, so it can straddle most obstacles that would hang up a traditional 4×4, allowing a completely different driving style.

2.  Does the length of the wheelbase make it harder to maneuver on switchbacks and other tight turns? No. The Pinzgauer has a tighter turning radius than the Jeep Wrangler Unlimited. It’s got a 40’ turning radius to the Jeep’s 41’ and he sits directly over the front axels…there is no hood. “This is one of the wonderful features of the truck and lets you see what’s on the trail ahead of you even when the hood is pointing toward the sky”. Bernhard says his Pinz turns like a forklift and makes the sharp turns that most people don’t expect it will be able to do.

Here are the comparative specs and commentary from Bernhard:

3.  Is it easy to get parts for the Pinz? Does it break down often?  The vehicles have only recently been retired from service with the Austrian army and NOS (new old stock) parts are readily available from Swiss Army Vehicles; a dealer in Fayetteville Arkansas. Bernhard carries loads of spare parts in case of a breakdown on the trail but has not encountered anything that couldn’t be easily fixed while out on the road. The simplicity of the vehicle with no electronics makes the Pinz an ideal overland rig, and in case the two spare tires are not enough it can be driven on just 4 wheels.

4.  What do you like most about owning a Pinzgauer?  “I get to meet everyone! When I go camping, people come by to ask me about my rig. They bring some beer, we share food. It’s great! I have met so many nice people that I wouldn’t have if my vehicle wasn’t so unique.” 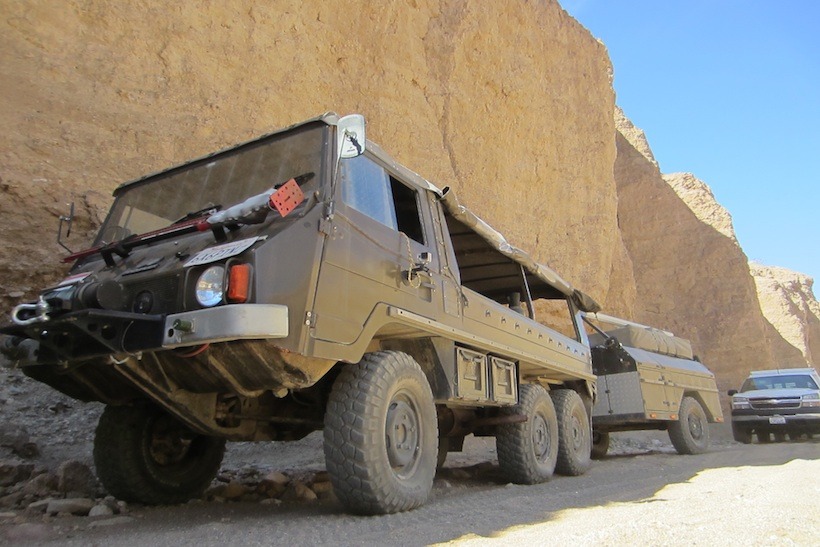 ~Take a look at our other rig reviews  ~

~A big thank you to Bernhard Leitner of Leitner designs, maker of the Active Cargo System,  and look for our write – ups on his custom made trailer and his budding new business….coming soon~