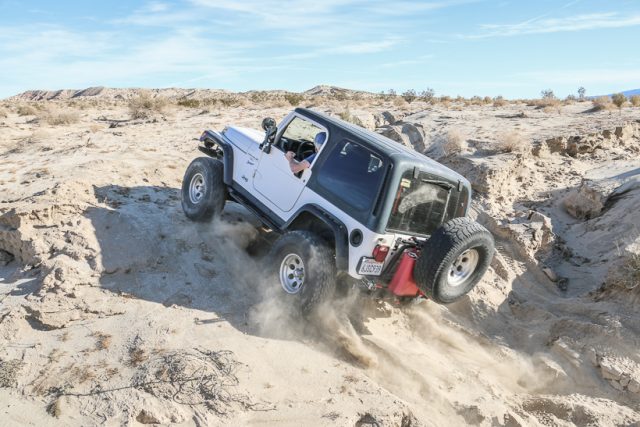 The following article is from Jim Allen’s “Four Wheeler’s Bible” 2nd edition. Printed with permission from Jim.  The info contained in this article is tried and true. Give it a read as a reminder or to sharpen your off-roading skills.

Momentum is defined as “the impetus of movement” and a “complex mixture of mass and velocity.” Inertia is another word that fits.  For our purposes, the definition of inertia, ” a body in motion tends to stay in motion”,  is the most useful definition.  The weight of your vehicle carries it along until friction, air resistance, and other factors slow it down.  That inertia/momentum is a useful tool for four-wheeling, but it must be used wisely.

It takes a certain amount of traction to put your vehicle in motion.  When circumstances don’t make that traction available, a little momentum can carry your through.  Sometimes that just means a steady speed over a problem area, and other times it means gaining a little speed on good ground before you encounter the obstacle.  Emphasis is on the “little”, at least at first.

Always try going easy the first time and increase the level of intensity gradually until you reach the no-go point and abort the attempt.

Momentum in mud, Sand, and Snow

All three of these ground conditions are similar in that they combine low surface strength and low shear strength.  Not only do you sink, but you have no traction.  Momentum can launch you completely across some soft areas or provide you with just enough help to claw your way across with the minimal traction available.  With enough speed you can actually hydroplane across a soft surface, but control is just about impossible.  Using momentum across soft ground requires that you evaluate the surroundings along with the obstacle.  Are you going to end up sideways or lose it completely and slam into a tree or rock?

There are many hills on which you could not start from a dead stop, but if you have a little motion, you can keep going.  That means a steady speed on a hill.  You may encounter spots of lesser traction, or a steeper slope, and momentum may be enough to carry you past it.  If not, you must be ready to respond instantly before you come to a stop.  Sometimes that means a little more throttle; other times it means backing off for torque control.  Momentum can also be used at the start of a low-traction climb to help you up.  The momentum is built up on flat ground.  On a short hill without enough traction to climb slowly, this may take you up without spinning a tire.  On a long hill, safe and sane levels of momentum may just carry you halfway and leave you perched with spinning tires and a failed-climb maneuver to perform.  The approach to a hill also may limit your momentum options with a sharp transition from horizontal to vertical.  In other cases, you may be able to build up quite a head of steam but, just as with soft ground, you can have control problems with too much speed.

Momentum is as useful in rocks as anywhere else, but because rocks are unyielding by nature, contact usually results in the vehicle getting the short straw.  As often as not, momentum fo rocky terrain comes into play when weight transfer unloads one axle and overloads the other.  This can happen on a straight climb, usually a very steep one if a highly tractive rock face is involved, or on ledges.  On a straight climb on rock faces, such as slickrock, play the game much like you would elsewhere;  maintain a steady speed and react appropriately if needed.  On a boulder-strewn landscape, your speed potential will be severely limited, but keep the momentum imparted and speeds as low as 1/mile per hour can be useful.  Again, try to maintain whatever movement you can rather than starting and stopping.  Climbing in loose rocks may require momentum, just as with soft ground, but too much speed can result in bouncing, slamming, cut tires, or a loss of control. 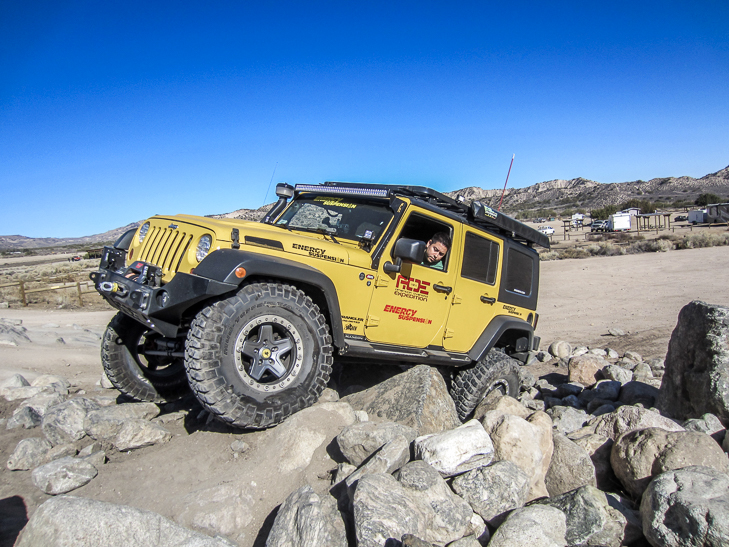 The ledge scenario involves the use of a “bump”.  Usually the front axle is up, though unloaded by weight transfer, and it’s the rear axle that can’t make the climb.  The bump combines momentum with a judicious stab of throttle at just the right time. If the driver applies a stab of throttle just as the rear tires hit the ledge, the momentum has the effect of momentarily “gluing” the tires to the rock by increasing ground pressure.  This can make the rig hop up that ledge like a jack-rabbit.  As you can imagine, the forces acting on the tire, suspension, and drivetrain are great, so the amount of momentum used, the amount of throttle, and the duration of the throttle, and the duration of the throttle application must be carefully chosen.  On a typical ledge, a “roll” of just a couple of feet is enough momentum for the bump.

You can buy a copy of Jim Allen’s Four-Wheeler’s Bible on Amazon.com

Guide to Off-Road Recovery – Part One

Guide to Off-Road Recovery – Part One