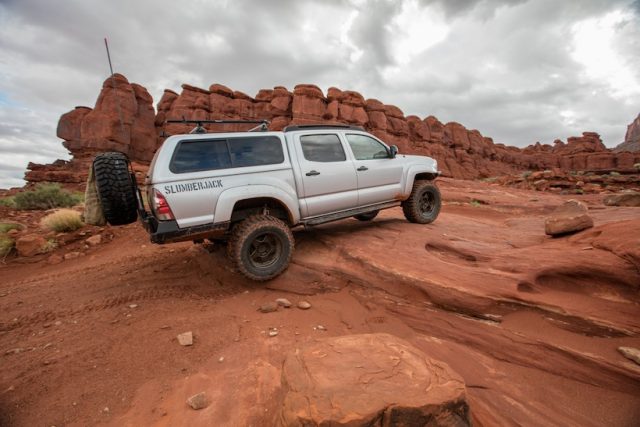 Exploring Canyonlands in off-road rigs: The following article comes from an interview I conducted with Nels Larson of Slumberjack.  The commentary, photos and captions will take you on an extraordinary excursion through Canyonlands National Park. Check out this epic four day photo journal and… TAP into Adventure!

Our original plan was to go on an overlanding trip as a Slumberjack team event. I was eager to test a prototype shelter I had been working on that will be released in spring 2017. I had reservations booked in the Maze, but when push came to shove, work scheduling conflicts got in the way of a team’s offroad trip.  So, it evolved into a personal trip with Justin Michael, from finance, his girlfriend Nikki, Dustin Miller and Aaron Bodrod both of whom are friends of Michaels. We decided to give up spots in the Maze in favor of a different route primarily through BLM land that skirts Canyonlands Maze district and goes through the Needles. We went with the non-booked over land sites to give us more freedom in our route finding and campsite selection. It also gave us creative control over where we would end up each night. This was going to be an epic Vehicle Supported Adventure!

Our plan was to overland from Moab to Chicken Corners, around Lockheart Basin, through the Needles district via the Elephant Hill Trail, then take Bobby’s Hole up to Beef Basin Road, then back to Moab. We expected it to be an epic adventure and it was!

Day 2: This was definitely a day that tested our navigational skills. We continued driving through Chicken Corners toward Lockheart Basin. Linking up to Lockheart Basin was a challenge and we ended up going in the wrong direction many times.

One of our attempts ended us up in a box canyon in Canyonlands.  Another time we got turned around and had to go back up an obstacle to get on the right trail. Time and time again, Justin got us back on the right path. He became our chief navigator, he’s got the best head for it.

This was probably the most technical part of the entire trip because of the large rocks and loose material. The rain was actually a bit of a help, damping down the loose sand and dirt. Most of the obstacles were clearance based not traction based. We spotted each other to limit risk and help with visibility. Some of the Canyonlands ascents were at such steep angles that we couldn’t see the obstacles in front of us.

For the average overlander, this would be advanced wheeling. To the average Jeeper or someone used to Moab, this is fairly easy stuff, considering how aggressive Moab can quickly become. That climb, working our way up and around the canyon in a loose loop, was a lot of fun. We had lunch at the top of Lockheart Canyon, then went on to Lockheart Basin.

Here’s where the story of our recovery of a crippled Disco comes in.  Towards the end of our loop around Lockhart Basin we encountered a Disco with two rear flats blocking the trail.  The couple were in happy spirits, but in need of assistance.  After a brief discussion, the owner agreed to let us help pull his crippled rig up onto flat ground and off the trail.  We hooked up Justin’s winch, and pulled him up.  To limit continued damage to his vehicle, we used Dustin’s Maxtrax to fill the gaps in the rocks for the rear wheels. It took some doing, but we were able to pull his disco up and out of the way.  At this point, I asked them  if they wanted to join us and ride in my truck for the next two days as we wandered back to Moab.  They declined, he was going to ride his mountain bike into Moab, rent a Jeep and come back with tires while his wife held down the fort at the vehicle. They had ample food, water and camping gear.  I asked them several times to join us, feeling guilty about leaving them there, but they were happy and comfortable with their plan.  So with a handshake we said goodbye and continued on.

Then there’s the story of me loosing my fenders that same day. Before our Canyonlands overland trip, I had put on new, larger wheels, tires and put in a new front suspension, but because my rear suspension was old, the rear of the rig was sagging a bit….. so the wheels were basically chewing up the fender mounts.

We camped at Lockheart Basin for the night.

This is a challenging trial that starts with  a very steep concrete reinforced slope of slick rock, then a series of short, tight switchbacks up to the top and down over a ridge.

After the initial climb, the trail comes around a corner to a steep slickrock climb up a short, smooth hill (there is a bypass around it to the left, but this climb is a fun one). Soon you come to the top of a rock and it seems like the trail disappears off the edge. There is a sign with a picture of a Jeep with an arrow pointing down. This is a good place to get out and see what’s ahead of you. This is a very steep rocky downhill section, called Switchback Hill.

The first few turns after this are fairly easy to make, but when you get closer to the bottom, the switchbacks become a series of 120 degree hairpins with signs that instruct the drivers to pull forward then reverse down. We backed down the switchbacks, as regulated by the signs. There were also multiple hairpins that required 5 to 6 point turns

Here, pull your mirrors in, get a spotter, go slow and you’ll be fine if you are driving a mid-sized vehicle.

There was a group ahead of us towing a teardrop that actually got stuck in the squeeze because of a roof rack that was too wide to make it through. We had a short delay while they worked to remove their roof rack, then pull their equipment through. It worked out fine. In the squeeze, it’s helpful to have both front and rear spotters. It’s good to have someone watching not only your approach, but also your body roll. This is a phenomenal trail, I would go back and do it again in a heartbeat, if I didn’t have such a long list of other places I’d like to explore!

That night we camped in a super cool spot.

Bobby’s Hole is a short, 1/4 mile climb with very deep sand in spots.  It ended up being a bit more challenging than expected, due to the erosion and loose soil. We spotted each other, not because of the technical nature of the obstacle, but because of the angle involved. Driving up, all you could see was your hood!  Thankfully, the recent rainfall improved our traction through the soft sand.

Beef Basin is a mellow, double track, flat, sandy and compressed clay road, that goes from 5,233 feet to 8,262 feet. It wraps up and around the mountains and exits at a river valley.

Along Beef Basin road we explored several ruins of Anastasi dwellings, they were very cool.  As these sites are unregulated, everyone is free to wander amongst them and take in the magic. This privilege comes with personal responsibility, please respect these ruins and leave them just as you found them.

We had some interesting descents that day, the recent rains and light snowfall quickly turned the hard packed clay road, classic to Utah, slick as grease. Mind the road warnings, this mellow road can turn nasty very quickly.

On our final night we camped by the river.  The night sky was clear and we were happy.  We’d had an amazing trip through beautiful country with some fun obstacles along the way.   The next day, we headed back through the Needles district to Moab, then home. It had truly been an epic adventure!

Here are the links to all component companies listed in the article: