Don’t You Dare Sell That Van! Joe Marshall, co-owner of Mule Expedition Outfitters, owned a passenger style tin top Vanagon Syncro when he and Dana started dating in 2009. It had been on blocks in his driveway for over a year due to a blown head gasket on its transplanted Subaru engine. In truth, it had become a bit of a source of contention between Joe and previous significant others in his life… and so it sat there. Sad. Alone.

In 2010, as the couple planned their upcoming wedding, Joe broached the subject of the Vanagon with his wife to be. He thought he should probably sell it due to the previous relationship conflicts it had caused, but Dana was having no part of that! She wanted a camper van, and not just any camper van, but the best that could be built. The build plan was set in motion to create Das Mule because, you know, “happy wife, happy life”.
The build occurred in stages, over weekends and evenings, over roughly two years. A Boeing Structural and Mechanical engineer, the quality of Joe’s work extended into the super finite details. The build was an exploration into what limits could be pushed with a Syncro, our goal was to turn it into a useable (and reliable) adventure rig. Before starting any building, we stripped the van down to its naked beginnings; bare metal and nothing else.

The build list was extensive, but we really had no time line. It was more a project we were enjoying and doing together with the goal of someday driving it instead of working on it.
The bodywork came first. While it could be argued that the old van wasn’t in desperate need, this was to be a project that we had built completly ourselves from start to finish so we could own every inch. Once it was stripped down, the laborious process of sanding and filling the body panels began. We will skip through that process fairly quickly here to keep your interest and just share a “ready for paint” and “painted” photo. However, if you’d like to get an idea for timing – leave this article on your nightstand for 3 months and come back to it. Now consider yourself sanding and buffing for that entire time….

Some of the mechanical features of the build were critical. The stock VW engines in the Vanagons were (are) notoriously underpowered for the size of the vehicle. We found a Subaru 2.5L VOHC engine with 11,000K miles on it to serve as the power plant.

The VW vans are also infamously known for catching on fire: new fuel lines, stainless steel coolant lines, and other tasty upgrades were incorporated for both safety and performance. 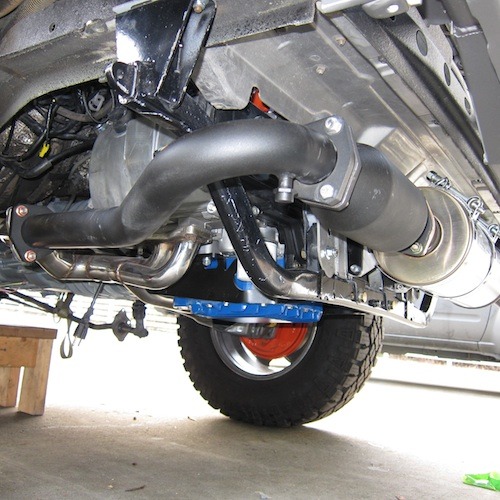 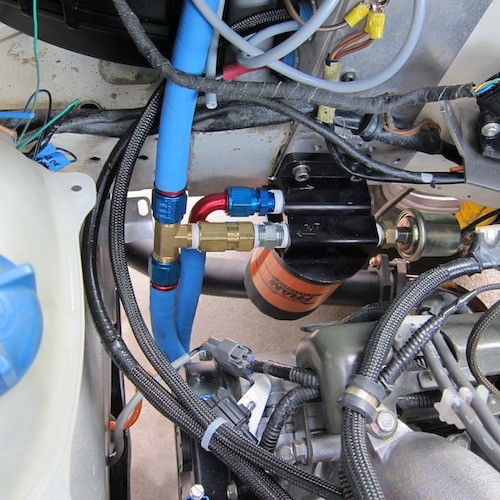 We knew we wanted better clearance and longer travel with the suspension. This required modifying the rear trailing arms and wheel wells to fit the larger 16” Mercedes CLK wheels and 31” Goodyear Duratracs and installing Fox Shox instead of some of the more common options available. (And yes, we powder coated the wheels ourselves with an oven we purchased on Craigslist. Where there is a will, there is a way.). 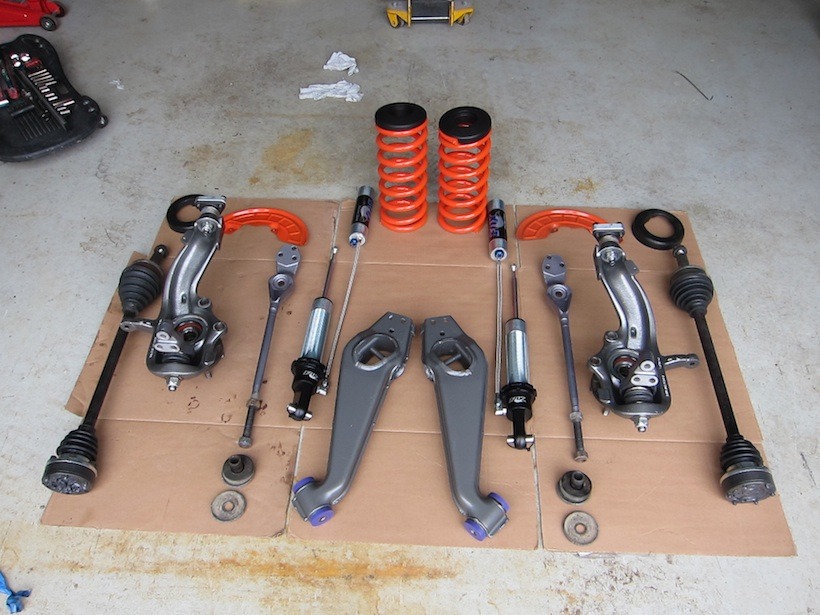 Considering this was an overland build and knowing we would often be traveling by ourselves, we wanted to know we had the means for self-recovery. A winch was high on the priority list, so Joe designed a front bumper that would offer better clearance, allow a winch to be mounted in the OEM tire carrier spot (Vanagons are rear engine vehicles, so the tire carrier is in the front.), and complement the aesthetics of the Syncro. He also incorporated a skid plate.

As the build continued, we turned our attention to creature comforts. Customers come in the store all the time and ask, “What do I need?” I have to confess to perhaps being a terrible salesperson, although an honest one! The truth is, you don’t “need” anything. You can go out in the woods for a night with a tarp, a can of beans and something to make a fire and survive. This “need” idea is a first world idea. That said, there’s certainly creature comforts and gear items that make living in your vehicle and sleeping in the woods much more enjoyable and we offer all kinds of them at MULE Expedition Outfitters. The truth is, a tarp, can of beans and fire starter isn’t going to entice anyone into a life of awesome adventure! It’s just that we encourage our customers not to miss out on the experience of being in the wilderness because they don’t have this item or that item yet. The idea is to go with what you have and then plan what gear you want to add from there.
So, leaving my soapbox regarding first world amenities, Joe and I do appreciate and did incorporate some pretty fine features into our van build. We cut the roof out of the top of the van and added a Westfalia pop top conversion so we’d have a bed up top. We also insulated the entire van before putting the interior panels back in, added a thermostat controlled Fantastic Fan, and installed a Propex HS2000 heater for climate control. Joe designed and installed a built in hot water system with a shower head off the back cabinet. We also added some interior lighting, a dual battery system, a propane stove, a sink with running water and a water tank. For external comforts, we run an ARB 2500 awning, we always pack a table and some lawn chairs and we run an ARB 50 QT fridge so we don’t have to deal with ice for a cooler.

As our build neared completion, we set the date for a three-month trip south to the Baja Peninsula. We hadn’t yet started Mule Expedition Outfitters, so taking an extended leave of absence from our jobs was a doable reality. Requests were filed, insurance documents were purchased, and we scrambled to complete our packing list.
In September of 2012, we left Maple Valley, WA and headed south. The goal and rules were simple. We would drive on nothing larger than two lane highways (read: NO FREEWAYS). We would have a rough idea of where we were going, but no itinerary. We would live in the van with our dog, Bella, and just travel and explore, for three months. 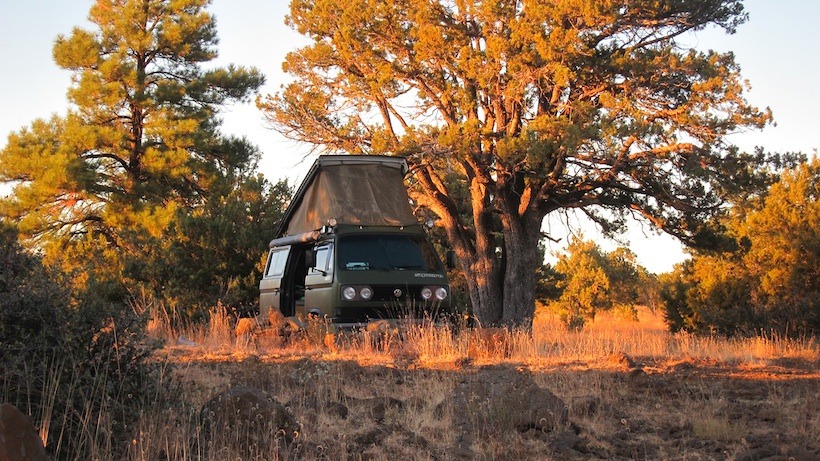 About Mule Expedition Outfitters: Building our own overland vehicle from start to finish, and then living in it for three months, solidified our passion for vehicle-based adventure. Our van, Das Mule, and the build, and life experience of using it, laid the foundation for our company and even inspired the name: Mule Expedition Outfitters. Ultimately, it’s not about the vehicle or gear you have or don’t have – it’s about building what you can and getting out there to explore. We offer design assistance, advice, custom fabrication, a full retail store with regular hours and even sponsor free classes to help equip our customers for having the same experiences we enjoy.  We tell our customers constantly, “If you wait until you are ready, you will never go.” Our van has undergone several re-designs and modifications since our trip in 2012, and we are always coming up with new ideas and things we want to change a bit. The interior has actually undergone a complete overhaul, and the entire driver’s side has been rebuilt due to a small tip over incident we added to our list of off road experiences in Eastern Oregon. That, however, is another story!
Contact Info:
MULE EXPEDITION OUTFITTERS
90 NW Gilman Blvd, Issaquah, WA 98027
206-818-7908
www.dasmule.com
Facebook/Mule Expedition Outfitters

DO YOU HAVE A CONVERSION YOU WANT TO SHARE WITH US? SEND IT TO [email protected]