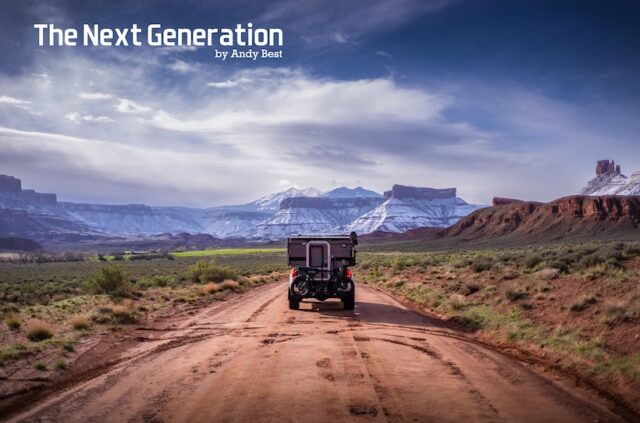 There’s a little green light glowing from just under my little standup desk. The light is coming from a tiny digital screen counting numbers down as I drain its battery. Like many nights in the camper, I’m standing in the darkness tinkering away. My computer screen lights up my small corner of the world filled with cameras, hard drives, and notes. Our pup Sequoia in the galley way just under my feet snoring. The furnace kicks on again just before a slight chill sets in. The girls are sound asleep in our king-sized bed that rolls high above our Tacoma’s four wheels. Just outside is the massive remote wilderness of Alaska. I’m preparing for a shoot here in Denali National Park and like with many shoots, I’m restless standing in place looking up maps, building shot sheets, mapping out schedules, and trying to wind down after another day of exploring. Imagine living, working, and existing in the smallest room in your house, with your whole family and your dog. Then imagine it really only being half that size and that’s what we adventure in. But let me back up a bit.

It’s been an absolute crazy journey these last 8 plus years, to say the least. Living life out on the road has been an endeavor that has challenged me to the extreme core. This chapter of my life was a decision based on my curiosity of who I’d become by the end. My through hike of the Pacific Crest Trail, if you will.

I’ve sold it all twice to move and live full-time on the road. The first time was in 2014, it was just my wife Erica, myself and our three dogs. Jax, Lola, and Sequoia. It was an entirely different experience being a little younger and exploring the world for ourselves. It was so simple. The world hadn’t gone remote yet so camping and boondocking was easier. We were exploring places for the first time. It was a solid two years of what felt like an eternity.

Now to the present. After living in Bend, Oregon for two years Erica and I needed to hit the road again. It’s hard to explain, but when the road calls you gotta go, so we set sail again in early summer 2019. This time however, the family was larger. I was a new father with the goal of sharing this beautiful world with my new little baby girl, Endellion. Well then, the surprises began. Later that year to our HUGE surprise we found out we were pregnant with our second child, the soon to be Helie. Shocked, but optimistic due to a mountain of new work coming my way in 2020, we could now think about planning our new life on the road with a growing family. Well, that’s when the world went sideways. Helie joined the world right at the start of a global pandemic, maybe you’ve heard about it. Within two weeks of the lock down we had baby Helie, and all my work evaporated for the foreseeable future. Now we had a family of four with three dogs living in our truck and nowhere to go. This, you can imagine, led to some tough decisions. We had to let two of our dogs go and retire with our extended family. Thankfully they went to a wonderful home where we could still see them. We hid in the mountains isolating from family and friends while only going into towns only when it was absolutely necessary. All parks we closed, libraries, basically everything that allows this lifestyle to work.

Fast Forward as the days and months went by and the world began to open back up. Our struggles began to ease, and the dust began to settle. We started to catch our stride and begin to enjoy life on the road again. I feel incredibly lucky and thankful for my friends at Four Wheel Campers and all my other sponsors for allowing us to roll on during such a crazy time.

This is the perspective I’m talking about. I guess I asked, and life delivered. As a father to two beautiful children and a husband to a gorgeous and courageous wife we’ve managed to fight on and persevere through the toughest time in our lives. It’s given me an opportunity to step back as the world was looking inwards analyzing at our place on this planet. I’ve connected with so many wonderful people through this journey that it almost brings me to tears as their smiling or masked faces flash through my mind. My kids have seen incredible places and have traveled the entire western part of North America. And now as I sit in Alaska feeling fuller than I ever have.

I am feeling so appreciative of the hard work that has gotten us through. Our journey continues out here. There will be a book someday that goes into much more depth, but as for now we are still out here, but this chapter is different from the last and now as I see the world reflect in my daughter’s eyes, now 5 and 2. I’m proud knowing that they are developing a deeper relationship and appreciation with humans and land alike. I’m ecstatic knowing these little stewards are going to come after me and light up this world in the best of ways. I am humbled to no end at how this journey has shaped us all.

This story was originally published in TAP Mag Sept Issue #3 and is sponsored content.

Denali In The Fall With The Gnar Wagon