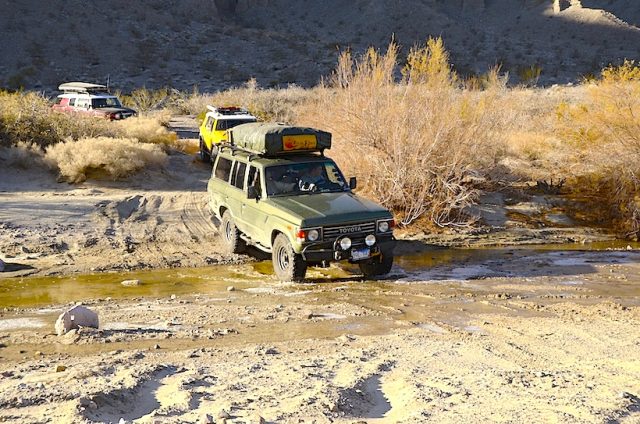 This month’s Featured Rig belongs to Jerry L’Ecuyer, owner of Tembo Tusk.  Here’s his story of building his rig.

“When I acquired my FJ-60, it came with a blown engine and original “poo” brown paint.  Both of which I planned on changing.  The idea was to source a junkyard Chevy 350 from a wrecked suburban to keep the costs down and collect all the conversion parts in preparation for the transplant. Pulling the old six cylinder engine and transmission was surprisingly easy.  Being an original California car, the bolts came apart without too much trouble.  Once the radiator was out of the way, there was no stopping and in about two hours the engine was sitting on my driveway.

Toyota was very generous with the engine compartment of the 60 series, which made fitting the V8 a pleasure.  I used a Downey bell housing to connect the 350 to the Toyota 4 speed transmission.  The hardest part of the install was building a set of cross member offsets to accommodate the new location of the transmission which shifted two inches forward.

I wanted to keep things simple on the trail, so I used an early 90s Chevy V8 with a throttle body injection system.  A throttle body system is a glorified carburetor with a simple computer for control.  It literally took connecting one wire from the original Toyota wiring harness to the Chevy computer and I had a working engine.  Not being a mechanic, I was surprised and thrilled that the engine started on the first try and what a rush it was to drive! 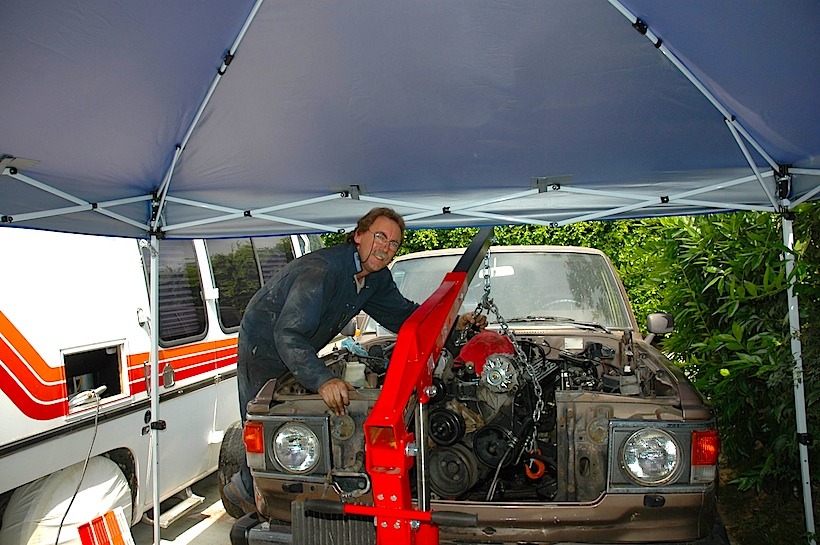 Now that the heart transplant was complete, it was time to tackle the body and interior.  I stripped everything out of the passenger compartment, including the headliner, seats and carpet.  In retrospect, I wish I had paid a bit more attention to sound deadening.  I was so impatient to get the vehicle painted and completed, I figured the new carpet and pad would be all I needed.  Wrong!  Next time I will take the time needed to address noise in the cabin.  Between the B8, aggressive tires and the ability to drive fast, the sound levels were tolerable, but less than ideal.  I replaced my original Toyota front seats with Pro-Car seats.  Beautiful high performance contoured body hugging seats.  Great on the trail, however they left a bit to be desired on long road trips.  After about 200 miles the butt starts to get sore!  If I had to do it again, I would strongly suggest keeping the Toyota seats and just refurbishing them.  For long trips they are far more comfortable.  I sourced the headliner from Spector Off-Road and had a local auto upholstery shop do the install.  Perfect fit!  I used the same shop to do the carpeting.  Much less frustrating than doing it myself! 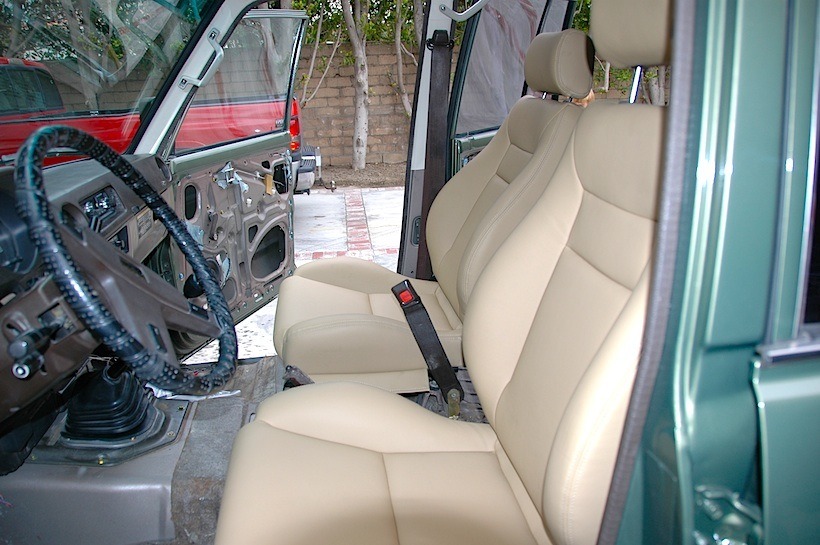 Before installing the interior, we tackled the paint.  Toyota makes one heck of a reliable, robust get- you- there – and – back vehicle.  However, when it comes to paint colors, they have no idea!  On the other hand, Land Rover produces a beautiful, high maintenance, super model piece of art.  A Land Rover looks great whether it is running or not and they know paint colors!  So I used the best of all worlds.  The utilitarian reliability of a Toyota, the ubiquitous Chevy power plant and the beauty of the Kent Green Metallic color of a Land Rover.  It really is the best of all worlds! 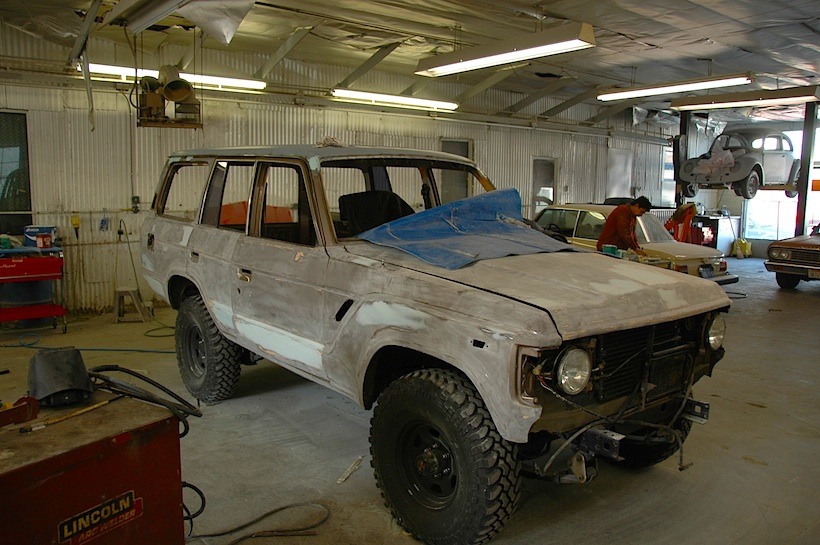 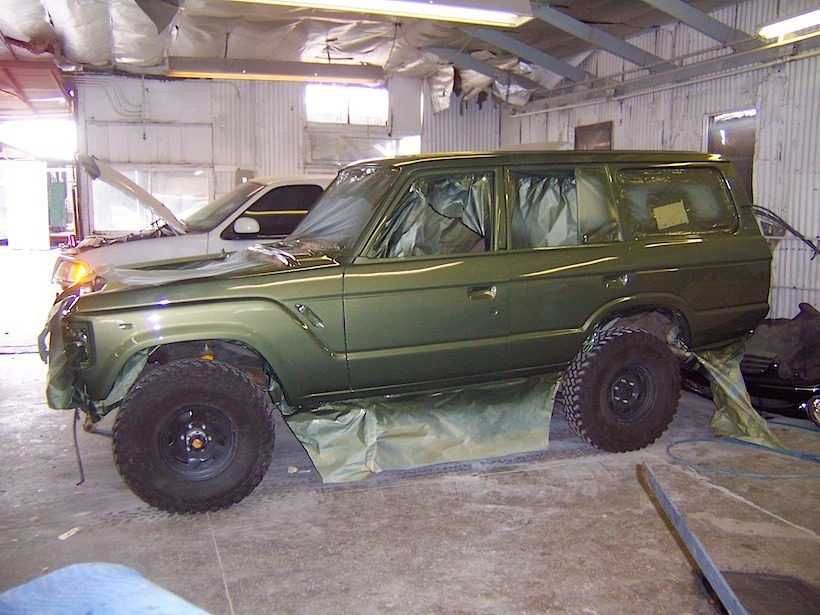 Lessons learned from my work in bringing an FJ-60 back to life?  Of paramount importance, start with a rust free vehicle.  This is more important than anything else.  Rust will come back with a vengeance.  Be careful of junk yard engines.  the crank shaft broke on my way out of Death Valley splitting the block horizontally.  You never know what trauma a junk yard engine has endured before you buy it.  I had a new 383 Stroker engine built at a local machine shop for just a bit more money than the cost of my junk yard engine and not to mention all of the labor to do the work twice!  If you have a 4-speed transmission, replace it with a 5- speed.  I did that when I pulled the engine the second time.  A 5-speed is a great upgrade and the V8 gives you the power to appreciate the extra gear.  Most importantly, don’t be afraid to work on your vehicle.  It is fun, rewarding and very Zen when it comes to knowing your truck inside and out.”

Check our other rig write-ups at The Adventure Portal/Rig of the month.

A special thanks to Jerry L’Ecuyer owner of Tembo Tusk  and maker of innovative gear for the off-road adventurer.