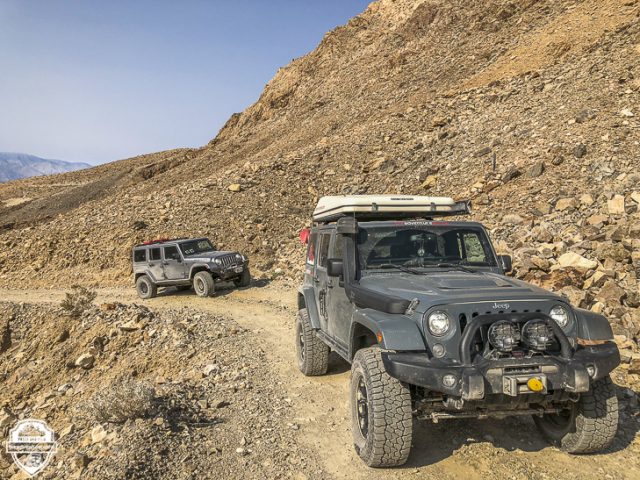 In November, a group of us went out to explore Death Valley National Park for four days. In my previous article, I gave you a rundown on the adventures of day one. If you missed that article, then start by reading it  here. On day two, we woke up in Saline Valley to sunshine and haze from the fires that were raging out of control to the west and southwest of us; the Woolsey fire and the The Mendocino Complex Fire, made up of River and Ranch fires. This was a sad time for many in CA and a sobering example of the dangerous toll  that years of drought and high temperatures could take on our state. One of our fellow travellers had cancelled just days before the trip because his neighborhood was on standby for evacuation. He and his family were evacuated and though no harm came to his family or property, many people we knew would be affected by them.

Today, we would be visiting a few of Death Valley National Park’s most iconic destinations. In order to reach them, we would climb up and over Lippencott Pass. As a result of heavy rains and flash floods, Lippencott had become worse for the wear. Some of the switchbacks had suffered a good deal of erosion. David had driven Lippencott a couple of weeks prior and assured us it was passable, if not a little hairy in sections of the climb. I couldn’t wait to get there. Most of the rest of the day we would be travelling along grated, dirt/stone roads, rich in washboard ridges with dust aplenty. Not great, but totally worth it.

Travelling through Saline Valley, our first stop was at the Salt Flats.

In 1911, a tram scaling 7,600 feet up the Inyo mountains and 5,000 feet down into the western side of Owens Valley was built to carry salt from Saline Valley to markets in California. Production started in 1913 and ended in 1930. I can’t even begin to imagine the hellish conditions the workers had to endure. As you can see from the photo, our view was from far away. Nothing to write home about, but a little piece of the rich history this area contains.

After the initial meandering assent, this road morphs into a steep, serious, low range, climb and should not be driven by someone new to off roading. There were a few times when I came to a narrow, washed out switchback that was off-camber and thought, “I’m gunna die.”.  If you look out your passenger window whilst uncomfortably off camber, you can see a treacherous rolling hill descent into the canyon below. That being said, it was good fun.

Lippencott Pass or as it is sometimes called, Lippencott Mine road, rises up and out of Saline Valley to Racetrack Road.  Before you get to the end of the road, you can park and walk up to a lookout peak with views of the Inyo Mountains, Saline Valley, and the Saline Range. It’s an expansive and starkly beautiful sight. The road ends a bit further on at a warning sign that is worse for wear but says, ” Lippincott Road, 4×4 High Clearance, No Tow service, Caution”.  I would hate to imagine climbing Lippencott and facing a vehicle coming down. I really don’t know how, with the washed out state it was in, two rigs going opposite directions would manage. That being said, the road was clear, we got to the top, had lunch, and braced ourselves for the next leg of our journey down  Racetrack road.  A long, merciless washboard road that passes by our next three stops.

The spanish word Playa refers to either a beach or a dry, flat lakebed. The Racetrack Playa is a flat, dry lakebed. It’s got a cracked clay surface scattered with a few rocks. Behind some of the rocks, you can see tracks. The rocks have, over many, many years, skirted along the surface as if by magic.

Before moving on to some interesting information about the Playa I have to say that every time I have been there, I have seen the signs that ask visitors not to drive on the Playa and I have seen tire marks………on the Playa.  I have also seen tracks with no rocks at the end of them, indicating that someone decided they would make good souvenirs. I don’t like it, don’t get it and wish people would knock it off. Ok, just had to get that out.

Here is a scientific explanation of the travelling rocks: Over the years, erosion has caused rocks from the surrounding mountains to break off and fall to the surface of the Racetrack. Current research suggests that a combination of rain and wind enable the rocks to move. A rain of about 1/2 inch, will wet the surface of the playa, providing a firm but extremely slippery surface. Strong winds of 50 mph or more, may skid the rocks along the slippery mud surface. Go to our Death Valley-Racetrack Road article to see how ice also factors into this movement. The Racetrack Playa is unique, a must see for photographers and adventurers alike. 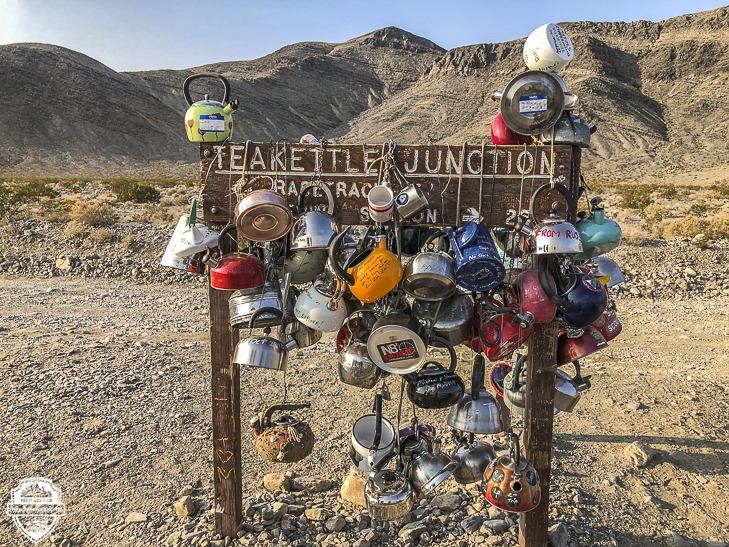 Teakettle Junction, a staple attraction for those looking to see one of Death Valleys quirky sights. It is located at the junction of Hidden Valley Road and Racetrack Road.  This is an unusual site signposted and covered with an international array of kettles. Most of the kettles have messages written on them. It’s interesting to see where all the kettles are from and to read the messages from around the world. Check out our article on Teakettle Junction for more information.

Ubehebe Crater is located at the north tip of the Cottonwood Mountains. The crater is half a mile wide and 500 to 777 feet deep. The age of the crater is disputed. Some studies estimate that it’s 800 years old and others estimate that it is 2,000-7,000 years old. By the time we got to the crater, the wind was up and the sun was going down. It’d been a long, dusty, washboard infused yet eventful day. We had seen a handful of iconic Death Valley attractions, and this was a wonderful way to cap off the day. We took a few photos then headed over to Mesquite Springs Campground at twilight for a fire and comradery.